Easter in Florence. A Particular And Fantastic Celebration 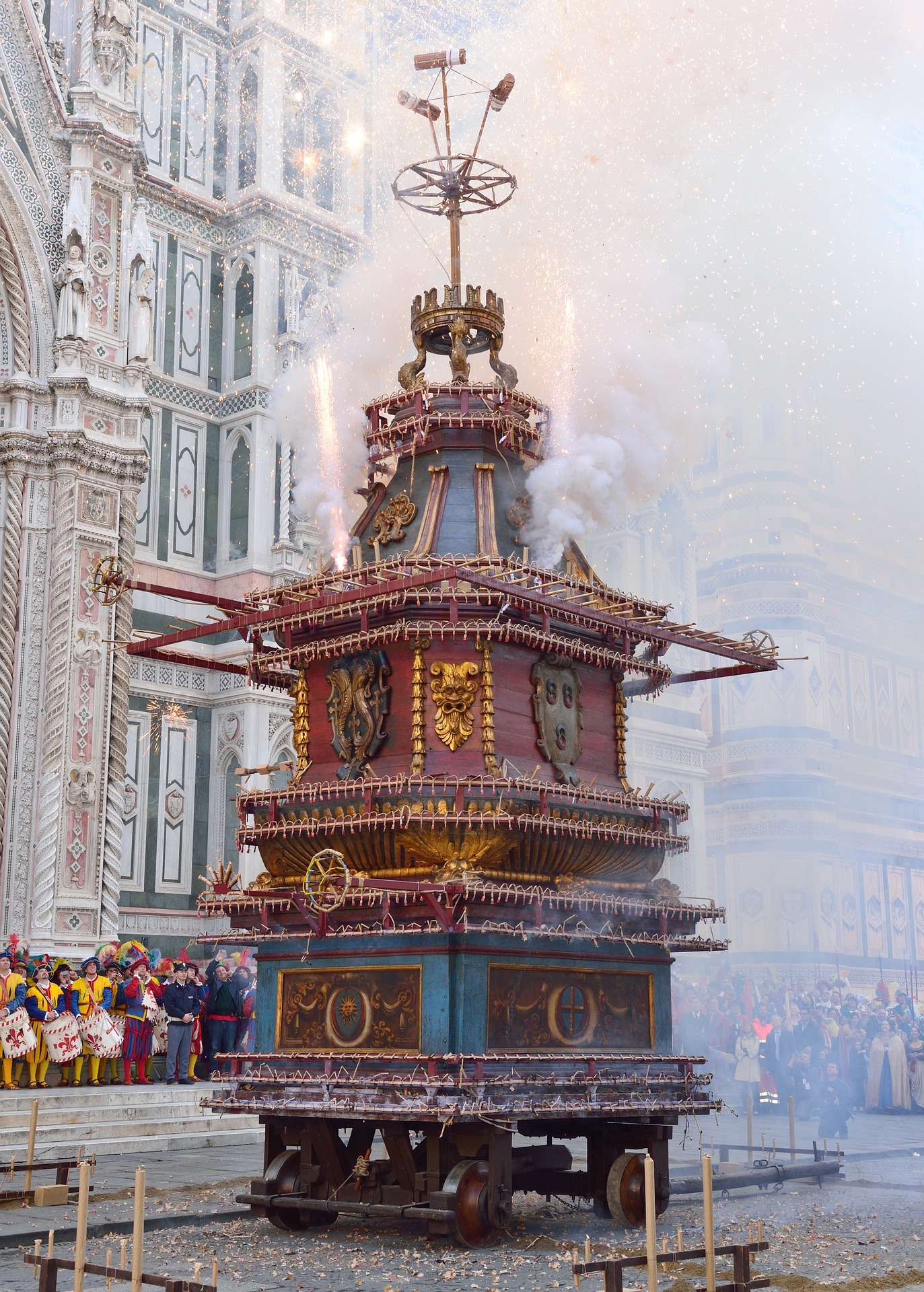 The Florentines And The “Brindellone”

For the Florentines, Easter is mainly the “Brindellone”. That is the monumental wagon that crosses the streets of Florence on Easter morning, pulled by two white oxen with red plumes, to arrive in Piazza Duomo, right in front of the Baptistery.

It is carried in a procession accompanied by the figures of historical football, with the 4 colors of the city: blue, red, white and green; the flag-wavers announced by the drums and the sound of the clarions, along with all the most important personalities, as happens in every official ceremony in Florence.

The Race of The Dove

At midday, the wagon, connected to the Cathedral altar by a steel cable, starts the race of the “Colombina” which, coming back from the high altar, touches the tip of the “Brindellone” again, lighting fireworks and giving life to to a real fireworks show, which punctually leaves everyone speechless: children, adults, Florentines and tourists.

Legend has it that the Florentines are anxiously awaiting the outcome of the “Colombina” race because it is said that when, over the years, the route has not been completed, the city has been hit by misfortunes and misfortunes. (For example, during Easter 1966, the year of the terrible flood in Florence, it seems that the dove did not finish its journey). So the Florentines, wherever they are in the world, try to find out about the outcome of this fateful “flight”.

The History of The Chariot And The Holy Flint Stones

The history of the explosion of the chariot dates back to the end of the 1200s, when Pazzino de ‘Pazzi, returning from the Crusades in the Holy Land, brought some flintstones belonging to the Holy Sepulcher to his city, given as a thank you for the services rendered to the Church by fighting.

These stones were used to light, on Easter night, the Easter candle from which all the candles of the Cathedral would be lit during the year. Over the centuries the sacred stones were lost, but the tradition of lighting the light, the symbol of the victory of Christ over the darkness of death, remained alive. So this huge structured wagon was built to “burst” by illuminating the Piazza del Duomo on Easter morning.

The day after Easter, Easter Monday, the “out of town” excursion is traditional. If time permits everyone goes out of town, into the countryside to have a picnic outdoors to enjoy the warm spring sun. The favorite foods, in addition to the usual savory pies with various fillings based on vegetables, eggs, and cheeses, are the classic boiled eggs or boiled, the pods with Tuscan pecorino, the “Schiacciatine” (flat salty bread) with oil stuffed with the famous Tuscan salami and many chocolate eggs and sweet doves.

The Brindellone in Florentine slang

A curiosity: in Florence with the word “Brindellone” it is also referred to as a rather tall and robust boy who moves a little awkwardly.

Do you want some information?

Send an e-mail to info@parola.it